Unrealistic performance claims for a number of lead-free flashings have prompted understandable criticism from lead manufacturers and distributors. With credentials to support their metal’s proven sustainability, durability, recyclability and design life you can hardly blame them. Even so, sales of lighter and cheaper alternatives have grown to such an extent that their combined value represents one of roofing’s fastest growing sectors. Not surprisingly, there are those who, in the absence of a British Standard governing quality have been prepared to cut corners in pursuit of quick market share. 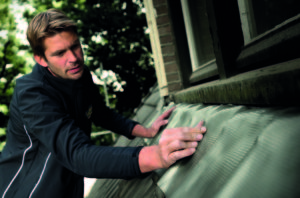 Claims in literature and on websites of like-for-like performance against lead have, in many cases, already been found to be unsupportable. Even so, many such statements continue to be published and as a result, have tended to tarnish the reputation of all such products. Despite longer established ones having years of trouble-free performance behind them and the undeniable contrast against poorer performers, many still instinctively buy what is cheapest. This is despite total lack of suitability for high performance applications such as the provision of a water barrier in cavity walls and under casings. Not a problem for any roofer of course, but it does point to very clear inadequacies which, all too often, are overlooked despite the clear absence of independent testing or supporting technical data. Marketing hype and low price are all there is.

The key elements of most lead-free flashings are their facing and backing and with such a large number of products now available these vary considerably. Backing adhesives are necessary to counteract light weight so any inability to withstand severe weather will soon lead to failure. New lamination techniques, however, have enabled a product to be developed which is dressed in the same way using the same tools as lead and needs no adhesive to guarantee its performance. Leadax, launched by Cromar Building Products in the UK 2017, is intrinsically similar to lead in appearance, thickness and malleability and has been certified by the BBA and KIWA. It needs no backing adhesive, typical uses including soakers, back gulleys, chimney, stepped and cover flashings together with all traditional forms of valley, dormer and abutment work. It consists of aluminium either side of a layer of modified polyvinyl butyral (PVB) and can be laid in 6-metre tray lengths. For the construction industry this is an entirely new (and patented) concept, its primary constituent being unused PVB left over from the manufacture of car windscreens and similar safety glass. The material is well known for providing a combination of toughness, flexibility and UV resistance and is used as an element of lamination in just the same way as it is in the automotive industry.

Leadax, from Cromar, comes in longer roll lengths than other lead-free flashings – 6 metres compared to 5 and, at 3.85 kg per square metre, is around 74 – 80% 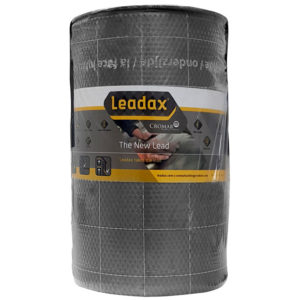 lighter than lead codes 3 and 4. Unlike other lead-free flashings, however, it can be used for jobs which would otherwise involve the considerably heavier code 5. While it remains true that there are some situations in which regulations require only lead to be used, at 3mm thick, this new form of flashing technology has enabled a considerably thicker material to be produced than any competitor. Indeed, some lead-free flashings are so thin that they are only suitable for limited applications in which code 3 lead would normally be used. Leadax offers the same qualities as lead in terms of flexibility and handling, without the associated weight and health risks and is applied using the same tools and technique. It therefore does not need to rely on being stretchable and as a result suffers none of the attendant problems with its installed appearance that have become commonplace with some lead-free products. Laps can be hot air welded at 350–400°C while, in exposed situations, a proprietary sealant is used to secure it to tiles or slates.

Such features provide clear differentiation against so many products which, though lead-free, offer little in terms of being a realistic alternative to lead. For the roofer the price at which this new generation of flashing has been pitched can only encourage its use.